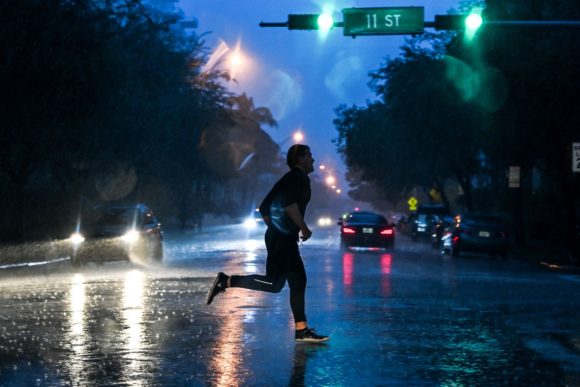 After coming ashore in the Florida Keys overnight, Tropical Storm Eta will wander the eastern Gulf of Mexico, dumping heavy rain on the Sunshine State and raking it with gusty winds.

Eta will likely become a Category 1 hurricane later this week as it drifts near Florida’s west coast for the rest of the week, but the worst aspects of the storm could be the flooding rains it drags through the region, including Cuba and Jamaica, the National Hurricane Center said.

“The biggest problem with this system is going to be the rainfall,” said Dan Kottlowski, a meteorologist at AccuWeather Inc. “A lot of places are going to have days of pouring rain.”

The official hurricane center track forecast currently takes Eta on a u-shaped path through the eastern Gulf of Mexico. Its threat to offshore oil and natural gas production will probably be low, Kottlowski said.

Eta adds to a record-breaking Atlantic hurricane season that’s seen hundreds of deaths, billions of dollars in damage, and a total of 28 storms. So many storms have formed that the hurricane center used up all the names on the official list by mid-September and has had to use Greek letters to designate subsequent systems. Eta is the 12th storm to hit the U.S. this year, an all-time high.

Eta made landfall in Florida at around 11 p.m. local time on Sunday and has since moved westward near the Dry Tortugas, a group of islands at end of the Florida Keys that’s home to a 19th century military fort. Across Florida, more than 41,000 customers are without power, according to PowerOutage.us, a website that tracks blackouts.

The storm has already left a path of destruction through Central America and the Caribbean. Eta previously made landfall in Cuba early Sunday with 65-mile-per-hour (105-kilometer-per-hour) winds and heavy rains. The storm killed more than 50 people across Central America last week, and more than 100 others are missing after it struck that region as a major hurricane, according to the Associated Press.

Oddly, because tropical storms spin counter-clockwise, some of the highest wind gusts have been hitting eastern Florida far from Eta’s center, Kottlowski said. Also, winds at the edge are traveling over water, so there is nothing to slow them down before they hit the eastern coast.

Eta will likely make landfall again somewhere between Tampa and the Florida Panhandle on the state’s west coast by as late as Saturday.

Florida Governor Ron DeSantis has declared an emergency in advance of Eta. In addition to Eta, forecasters are also watching another potential storm in the central Atlantic that has a 40% chance of forming in the next five days, the hurricane center said.

About the photo: A man during heavy rain and wind as tropical storm Eta approaches south of Florida, in Miami, Florida on November 8, 2020. Photographer: Chandan Khanna/AFP/Getty Images