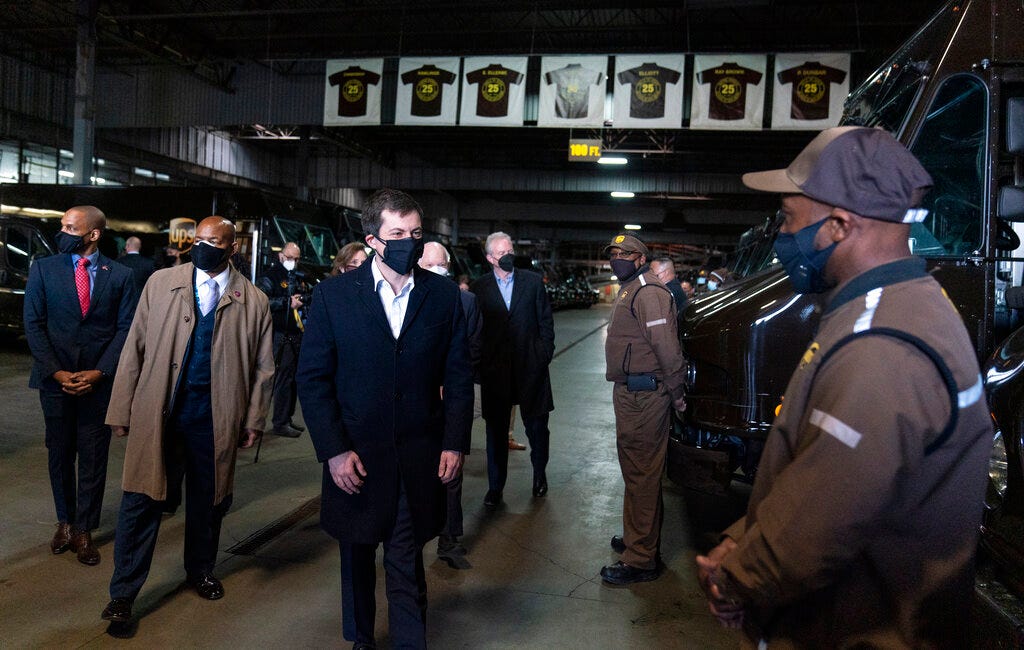 It will take more than a few swipes of the pen for Pete Buttigieg to overcome four years of Trump-era deregulation at the U.S. Department of Transportation and impose his priorities on everything from aviation safety to auto emissions.

That’s because the department is one of a handful of agencies where the anti-regulatory zeal of former President Donald Trump was enshrined into federal law, at least partially tying the hands of the agency’s new leaders – even for measures sought by industry.

The rules governing regulation are “a booby trap that the Trump administration left behind,” said Rena Steinzor, a University of Maryland Carey Law School professor who has written on regulatory policy.

The agency said in an emailed statement that Transportation Secretary Buttigieg’s team is “working to remove unnecessary and counterproductive rulemaking and other limitations on our ability to address safety, equity, and climate issues.”

That includes looking at the law left behind by the previous administration, it said.

The Trump-inspired policies have nearly halted the Federal Aviation Administration’s issuance of technical documents to help manufacturers comply with sometimes-arcane agency rules because all guidance now must go through government lawyers. In one case, European regulators grew frustrated waiting for the FAA to enact a measure they had jointly developed, so they did it on their own.

For the industry, which was blanching over the Trump policies in recent years, revising the law is critical. Companies need updated regulations and government technical guidance to design new products and speed them to market.

Dozens of technically complex issues such as ground stations that control drone flights and battery safety have been put on hold, some for years, according to public records, a trade group and multiple people familiar with its impacts.

Moving forward, the impacts could reverberate through other sectors as well. President Joe Biden may find it more difficult to adopt the tough new auto-emissions standards he’s promised to fight global warming. In the cases of such costly and controversial proposals, DOT agencies may be required to hold public hearings, an unusual step that would make approval more time consuming, Steinzor said.

In 2019, after Trump ordered agencies to kill two regulations for each new one, DOT took the idea further. That policy and others, including heightened legal scrutiny of all agency “guidance” and possible public hearings for major rule changes, became binding and can’t be easily undone by Biden with an executive order.

Trump’s assault on regulation was supposed to make it easier for businesses to operate without government interference. In the aviation realm, it has had the opposite effect – and at times undercut work to enhance safety, the people familiar with the policy say.

“They’ve unleashed a restrictive policy that has run amok, that has gone well beyond what is needed for our industry,” said Tony Fazio, a former senior FAA official who now works as a consultant. “Both industry and safety advocates are frustrated.”

The restrictions that came from the Trump White House also led to the quiet shelving more than two years ago of a major safety overhaul of aircraft manufacturers that had wide industry support, according to people familiar with the matter who asked not to be identified. Congress later ordered the overhaul as a result of the Boeing Co. 737 Max crashes.

A similar proposal by the FAA to upgrade safety at U.S. airports was also delayed, the people said.

Just as significant to industry has been the almost complete halt to the more routine technical work FAA conducts in collaboration with the aviation industry and nonprofit standards groups to update safety requirements and enable new technologies.

Last summer, for example, the European Aviation Safety Agency notified FAA officials it “couldn’t wait further” and was issuing updated standards for the development of electronic devices on aircraft. In a July 29 email reviewed by Bloomberg News, the European regulator said it had worked hand-in-hand developing the standard with FAA and each agency had completed reviews of it.

But the U.S. was unable to finalize the standard because of increased scrutiny under the Trump-era policies, people familiar with the action said. The FAA is still relying on an outdated, 15-year-old version of the guidance, according to agency records.

Such technical work regularly occurs behind the scenes and is the grease that keeps the aviation industry’s wheels turning.

In this case, companies that make components for increasingly computerized cockpits had sought the changes. Not only would it spell out how to gain approvals for new designs, but having the same standards in Europe and the U.S. were critical for allowing exports.

At the close of last year, RTCA Inc., a nonprofit group charged with helping the agency keep up with technology, had a backlog of 24 technical reports awaiting FAA approval, according to its records.

The regulatory and technical-standards gridlock at FAA have stemmed directly from policies implemented by Trump after he took office in 2017.

Under a DOT legal opinion in 2018, which was enshrined as a federal law in December 2019, the FAA and other agencies under the department were required to submit proposed guidance to agency lawyers for review and to estimate the costs. The resulting reviews have meant little was approved, according to industry officials and documents.

The opinion on guidance was written by then-DOT General Counsel Steven Bradbury. A conservative, Bradbury authored controversial legal memos while working at the Justice Department in the 2000s justifying what critics called torture techniques for interrogating suspected terrorists.

Bradbury, who also served as DOT’s acting deputy secretary under Trump’s Transportation Secretary, Elaine Chao, said in an email he was unaware that the policy had created a backlog. The intent of the rule was to promote transparency and the legal reviews were “just basic good government,” he said.

“I believe that with good management, legal review can occur without introducing significant delay in the process,” he said. The department’s decision not to proceed with the safety initiative in 2018 was made because of policy issues and the broader changes governing new regulations at DOT shouldn’t impede the new administration’s initiatives, he said.

Even though Biden was able to nullify Trump’s executive orders on regulations within hours of taking office, the 2019 law enacted by DOT included some of the same restrictions, giving them the force of law at DOT and the agencies that report to it, such as FAA. For example, it instructs agencies to identify two “regulatory burdens” to be revoked for each new significant rule.

Buttigieg, who sought the Democratic nomination for president in 2020, isn’t powerless. He can blunt some aspects of the DOT regulatory environment he inherits with immediate policy shifts and can use a relatively streamlined process to rewrite the agency’s regulatory policy, said Cary Coglianese, director of the University of Pennsylvania Carey Law School’s Penn Program on Regulation.

But Steinzor, the University of Maryland law professor, and others said some of the agency’s rules won’t necessarily be so easy to sidestep and they could open Buttigieg’s team to lawsuits.


One senior industry official who monitors aviation policy said Buttigieg will have to rescind the DOT regulations before the agency can return to normal. Among other things, those rules threaten speedy implementation of new safety requirements imposed by Congress in December as a result of the 737 Max accidents, said the person.

Another industry official said companies fear it could take months or years to undo the DOT shift.