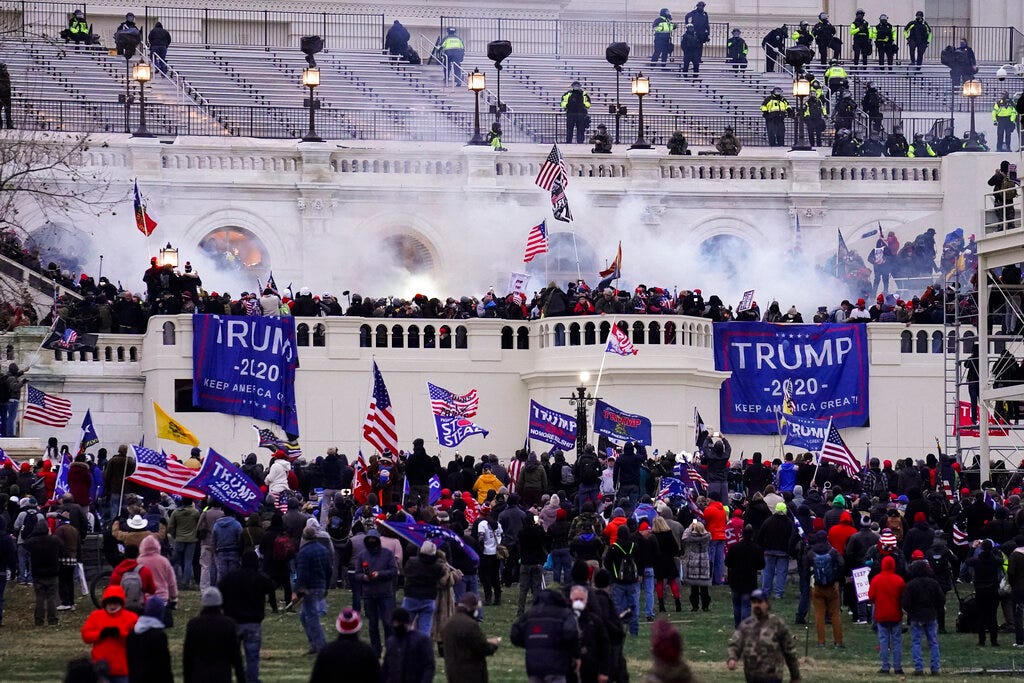 Washington –  A new federal intelligence report warns that adherents of QAnon, the conspiracy theory embraced by some in the mob that stormed the U.S. Capitol, could target Democrats and other political opponents for more violence as the movement’s false prophecies increasingly fail to come true.

Many QAnon followers believe former President Donald Trump was fighting enemies within the so-called deep state to expose a cabal of Satan-worshipping cannibals operating a child sex trafficking ring. Trump’s loss to President Joe Biden disillusioned some believers in “The Storm,” a supposed reckoning in which Trump’s enemies would be tried and executed. Some adherents have now pivoted into believing that Trump is the “shadow president” or that Biden’s victory was a sham.

The report was compiled by the FBI and the Department of Homeland Security and released Monday by Sen. Martin Heinrich, a New Mexico Democrat. It predicts that while some QAnon adherents will pull back, others “likely will begin to believe they can no longer ‘trust the plan’ referenced in QAnon posts and that they have an obligation to change from serving as ‘digital soldiers’ towards engaging in real world violence.”

As major social media companies suspend or remove QAnon-themed accounts, many followers have moved to less well-known platforms and discussed how to radicalize new users on them, the report says.

The report says several factors will contribute to QAnon’s long-term durability, including the COVID-19 pandemic, some social media companies allowing posts about the theories, societal polarization in the U.S., and the “frequency and content of pro-QAnon statements by public individuals who feature prominently in core QAnon narratives.”

The report does not identify any of those public individuals. But Trump, who has praised QAnon followers as “people that love our country,” has repeatedly refused to acknowledge the election is over and spoken baselessly of his victory being “stolen,” despite multiple court rulings and a finding by his own Justice Department upholding the integrity of the election. One longtime ally told The Associated Press that Trump has given credence to a conspiracy theory that he could somehow be reinstated into the presidency in August.

Heinrich and Sen. Chuck Schumer, D-N.Y., requested the assessment in December. Heinrich pressed FBI Director Chris Wray during an intelligence committee hearing in April to release an assessment of how the government views QAnon. “The public deserves to know how the government assesses the threat to our country from those who would act violently on such beliefs,” he said then.

The movement around QAnon has already been linked to political violence, notably during the Jan. 6 Capitol insurrection in which some rioters believed they would reverse Trump’s defeat. At least 20 QAnon followers have been charged with federal crimes related to Jan. 6, according to an AP review of court records.

Some charged in the riot wore attire bearing the telltale letter “Q” when they stormed the Capitol. One of the defendants, Jacob Chansley, calls himself the “QAnon Shaman” and wore a furry hat with horns, face paint and no shirt that day. Others had posted about QAnon on social media before the riot.

The Justice Department has arrested more than 400 people in the insurrection, during which pro-Trump rioters stormed the U.S. Capitol, caused about $1.5 million worth of damage and sent lawmakers running for their lives. Five people died and dozens of police officers were wounded. Defendants have argued that Trump himself spurred them on, or they were just following the crowd, or law enforcement allowed them in, or they were the victims of disinformation stoked by right-wing media.

Lawyers for some of the defendants have argued their clients were specifically misguided by QAnon.

Defense attorney Christopher Davis argued that his client, Douglas Jensen, is a victim of internet-driven conspiracy promoted by “very clever people, who were uniquely equipped with slight, if any, moral or social consciousness.” Jensen now realizes that he “bought into a pack of lies,” his lawyer maintains.

“For reasons he does not even understand today, he became a ‘true believer’ and was convinced he doing a noble service by becoming a digital soldier for ‘Q.’ Maybe it was mid-life crisis, the pandemic, or perhaps the message just seemed to elevate him from his ordinary life to an exalted status with an honorable goal,” Davis wrote.

A witness told the FBI that another defendant, Kevin Strong, expressed a belief that Jan. 6 would usher in “World War 3” and the military would be involved. Strong, who was a Federal Aviation Administration employee in San Bernardino, California, had a flag with a QAnon slogan on his house and has declared that he had “Q clearance,” an FBI agent wrote in an affidavit.

“He had recently purchased a new truck and believed that QAnon would cover the debt,” the agent wrote.


We’re offering a great deal on all-access subscriptions. Check it out here.