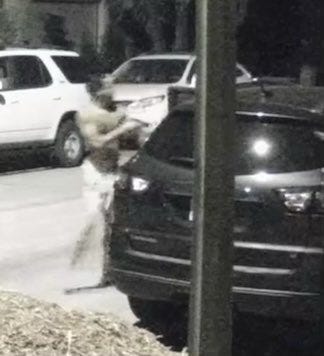 San Jose, Calif. – Dramatic video footage released Wednesday by California police shows a Black man walking around an unmarked police vehicle, opening the door and pointing a gun at an undercover officer inside before the man was fatally shot.

San Jose Police Chief Anthony Mata said two undercover officers were conducting surveillance on 31-year-old Demetrius Stanley Monday and had no plans to arrest or confront him. But Stanley approached the car and opened the door, forcing the officer to fire, Mata said.

Police released images of the man holding a pistol and aiming it at an unmarked police car. Officials released the images Tuesday, shortly before more than 100 demonstrators marched along streets and a freeway to protest the Memorial Day shooting of 31-year-old Demetrius Stanley.

Two officers were confronted by Stanley and an officer opened fire, police officials said in statements posted on social media.

No other details were released. Police were expected to hold a news conference later Wednesday on the case.

Family members and some of those who participated in the protest accused police of withholding key details about the shooting. They said home-security video showed the officers were in plainclothes and an unmarked vehicle, and did not announce themselves as police, the Mercury News reported.

The protest march was led by the BLACK Outreach SJ and HERO Tent activist groups that protested last spring after the police killing of George Floyd in Minneapolis, and the San Jose Police Department’s violent response to protests in the wake of the killing.

“They’re going to try and say that it was as simple as he pointed guns at police officers, but that’s not what happened,” said Lou Dimes, president of BLACK Outreach SJ. “He was being stalked by people in plain clothing who didn’t identify themselves as police officers. He thought he was in danger.”