Directed by Lynn Shelton (“Humpday,” “Your Sister’s Sister”), the film follows two women who show up to collect one’s inheritance from her deceased grandfather, but the only item she’s received is an antique sword that was believed by her grandfather to be proof that the South won the Civil War.

Maron recently described the story this way: “There’s a guy, a transplant to Birmingham, Alabama. He owns a pawn shop for different reasons. He’s sort of a cynical but fairly honest guy. A couple of women come in with…an artifact that they make claims about that could really change the way that we see U.S. history.”

Prior to making the film, Shelton went on a writing retreat in Kentucky, and the movie soon took on a southern setting and theme. The director, who co-wrote the film with former “Saturday Night Live” performer and filmmaker Mike O’Brien, documented the shoot in Birmimgham via several Instagram posts, which you can see below.

The film was shot in Birmingham and Argo in just 12 days.

In May 2018, while filming the film in Birmingham, Maron took a side trip to Montgomery to visit the National Memorial for Justice and Peace, which he discussed on his podcast. 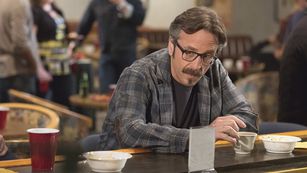 ‘It blew my mind’: Marc Maron opens up about powerful trip to new Montgomery memorial

“It definitely blew my mind, and I am a different person because of it.”

“Sword of Trust” opens in theaters July 12. Watch the trailer below: