Shares of Dave & Buster’s Entertainment (NASDAQ:PLAY) were down 21.4% at 2 p.m. EDT on Wednesday after the company reported results for the 2020 first quarter following Tuesday’s market close. Today’s massive drop managed to not only wipe out what had been a pretty decent gain so far this year, but also send shares 9% into the red for 2019. 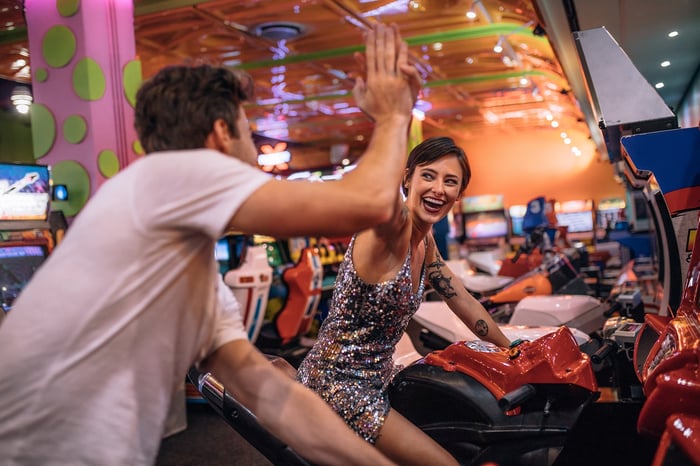 A recent tweet from my Motley Fool colleague Brian Stoffel fairly sums up what investors are thinking about the company’s Q1 results:

Analyst: (paraphrased) “I’m looking at the calendar, what on earth are you talking about?”

And while that’s a bit glib, it does underscore the “problem” investors saw in Dave & Buster’s results.

The company reported sales of $364 million in the quarter, up 10% year over year, and earnings of $1.13 per share, up 9%. Both are relatively strong, but if not for the company’s ongoing expansion plans, Dave & Buster’s would likely be going backward. Same-store sales fell 0.3% in the quarter, reversing the one-quarter trend of comps growth in the sequential period.

So why all the worry over comps? After all, profits and sales are growing. In short, because Dave & Buster’s can build its way into growth by adding new locations for only so long. Moreover, the company reported a big 3.3% decline in food and beverage comps, more than offsetting the 1.8% increase in amusement comps.

To put it another way, the company’s ability to remain relevant once its restaurants have been open long enough for the novelty to wear off is being questioned, and investors want to see more customers coming in for food and beverages, not fewer. This is an area the company has done well at in the past, though it has been a struggle the past couple of years.

If management can improve on its food and beverage strategy and start drawing in more customers, that would likely bode well for its highly profitable amusements business, too. Frankly, plenty of people may come just for the games and not eat, but more people coming to eat would almost certainly further boost amusement revenue — and profits — too.