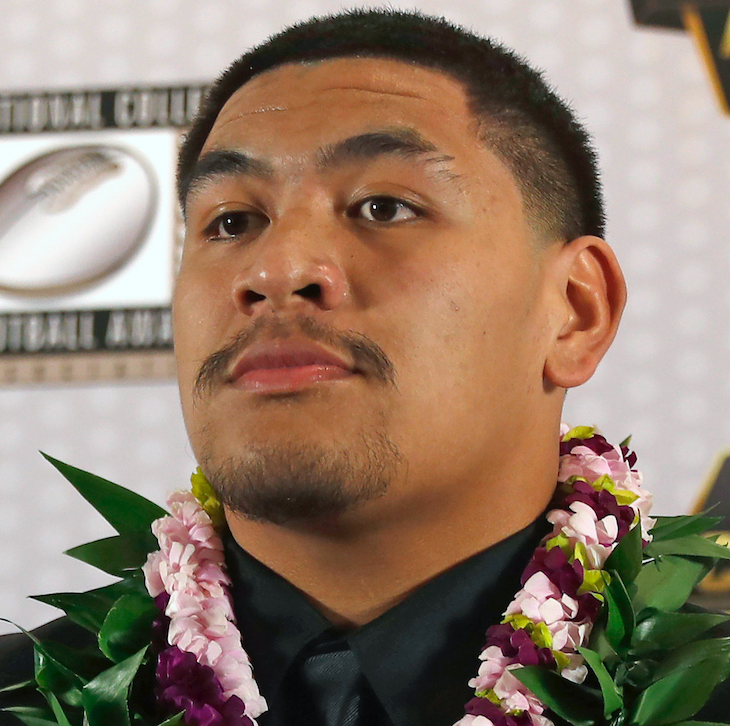 Justin Rogers talks to Oregon offensive tackle Penei Sewell about being drafted by the Lions and joining the team’s offensive line.

The Lions’ new regime did something the franchise hasn’t often done over the years — they made a first-round selection that made perfect sense. Sticking at No. 7, GM Brad Holmes grabbed the best offensive tackle in the draft, Oregon’s Penei Sewell, and it was one of the least-dramatic picks by any team Thursday night.

We’ll take that as a good sign. Would it have been nice to see the Lions trade down and collect more picks? Sure. But according to NFL rumors throughout the day, Holmes was asking for too much, and now we know why. The Lions loved Sewell, who can step in at right tackle and actually — dare I say it? — solidify a top-10 offensive line. Some analysts consider Sewell the best tackle prospect in a decade, and his selection received a rare consensus of raves from fans and critics.

“I’d say before the draft, the talk was a lot heavier,” Holmes said. “At our pick, the phone rang from a couple teams, but we just felt so good about Penei, it wasn’t intriguing enough for us to risk it.”

The pick is eminently endorsable because the Lions are playing the long game (which is better than the wrong game). If they were close to contending, they absolutely could’ve grabbed a receiver or defensive playmaker. But they’re not kidding themselves, and they’re not trying to kid you, either.

Two of the top five quarterbacks — Ohio State’s Justin Fields and Alabama’s Mac Jones — were available at No. 7, but the Lions weren’t the only team with question marks about them. The Bears traded up to get Fields at No. 11, and sure, there’s a chance he haunts the Lions. And with Aaron Rodgers’ future in Green Bay in doubt, there could be an opening in the NFC North. But the Lions committed to Jared Goff for at least a year, and reaching for a quarterback didn’t make sense in the early stages of a massive rebuild.

Stick with a plan and don’t bend to the fickle winds. Not many Lions regimes have done that, and hey, it’s worth a try. Holmes and Dan Campbell came in talking tough — biting kneecaps and all that — and so far, they’ve backed it up. They moved aggressively to land Goff and two first-round picks in the Matthew Stafford trade, and stood firm when other teams called about their pick.

If Sewell wasn’t available at seven, I bet the Lions would’ve tried harder to move down. But when the teams directly ahead of them — Falcons (tight end Kyle Pitts), Bengals (WR Ja’Marr Chase) and Dolphins (WR Jaylen Waddle) — all went for the shiny pieces, the Lions got a gift. 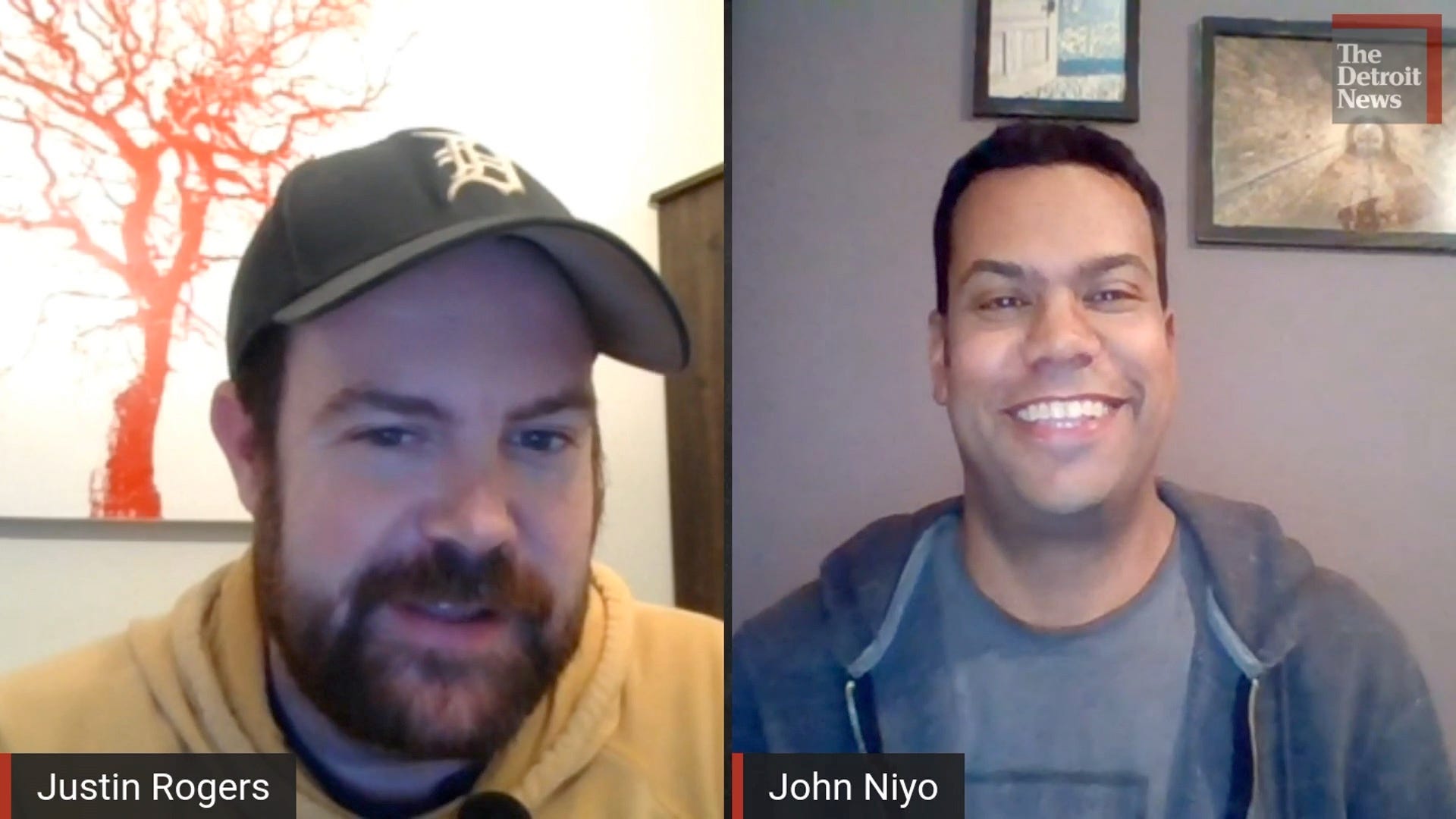 “I think Penei is pretty flashy himself,” Holmes said. “It’s often termed not as sexy when you go with a big lineman. Sometimes they say it’s safe and sound, but I think it’ll be a sexy, attractive pick when he’s rolling with our offensive line during the season. …We identified the offensive line as a strength on our teams, so to be able to feed the beast and make it even more of a powerful unit, that’s what it came down to.”

The video from their draft room showed owner Sheila Ford Hamp clapping, while Holmes and Campbell leapt and hugged. That’s the way many teams react to their selections, but this was an exuberance we’re not used to seeing.

“That was our guy,” Campbell said on Fox 2. “This is a big man who can move. He has great feet, a temperament about him, an attitude and he’s a cornerstone player, man. He’s somebody you can build a team around and that’s exactly why we got him. … We are through the roof.”

The simple theory in football is, bigger is better. Faster is good too, and the Lions sorely lack big-play receivers. They also have gaping holes on defense, but defensive standouts weren’t the strength of this draft. The first seven picks were on offense, including three quarterbacks, and touted Penn State linebacker Micah Parsons went 12th to the Cowboys.

The philosophy espoused by Holmes, Campbell and offensive coordinator Anthony Lynn is fairly clear — run the ball effectively enough that play-action actually is a legitimate weapon. The Lions didn’t do it for 12 years with Stafford but now have a line — Taylor Decker, Jonah Jackson, Frank Ragnow, Halapoulivaati Vaitai (or someone else) and Sewell — that’s large, mobile and potentially punishing.

On his Zoom call with Detroit media, Sewell was bursting with joy. He said he was a Lions fan as a youngster because he liked Calvin Johnson and Jahvid Best, and when he played Madden video games with his siblings, he wanted to be the underdog.

He certainly knows how it feels. He grew up in a beach shack in a tiny town in American Samoa and now joins the NFL’s perennial underdog team.

“The fit is awesome,” Sewell said. “The way coach Campbell approaches the game is the way I like to. I like to come physical each and every day and get better that way.”

Sewell said he didn’t hear much from the Lions until the end. If that was part of a smokescreen by Holmes, well done. I doubt the Lions needed much confirmation of their choice, but NFL guru Adam Schefter tweeted out this nugget: “One NFL head coach called Lions’ first-round pick Penei Sewell, ‘the one surefire Hall of Famer in this draft class.’”

That’s not coming from Holmes, Campbell or Lions superfan Ron “Crackman” Crachiola, who was on the draft stage in Cleveland. Lavish projections always are dangerous but Sewell has impressive credentials. He’s one of the youngest players in the draft (20) and has the size (6-foot-5, 331 pounds) and nimbleness to pass-block and run-block. He opted out of his final year at Oregon, but many players made similar decisions and didn’t appear to damage their draft stock.

In 678 career passing snaps at Oregon, Sewell allowed one sack. According to Pro Football Focus, he allowed only seven quarterback pressures the entire 2019 season, and was graded first in the nation in run-blocking and third in pass-blocking.

Some people are conditioned to reflexively doubt the Lions’ first-round pick, no matter who it is. I get it. I didn’t like taking a cornerback, Jeff Okudah, last year, or a tight end, T.J. Hockenson, the year before. But it’s hard to find anything to dislike about this pick, and Sewell should start from Day 1. The Lions are far from a well-rounded team and it’s silly to think one player would flesh out their awful defense. But one prime tackle could finish out an already-decent offensive line, and when starting over, that’s never a bad place to begin.